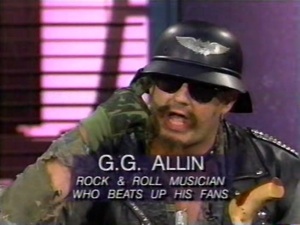 That's one way of putting it.
Influences: Johnny Cash, Jeff Dahl, The Doors, Janis Joplin, MC5, New York Dolls, The Ramones, The Stooges, Suicide, Tiny Tim, Alice Cooper, Hank Williams
"I'm trying to bring danger back into rock 'n roll and there are no limits and no laws and I break down every barrier put in front of me till the day I die."
—Kevin Michael "GG" Allin
Advertisement:

Kevin Michael "GG" Allin (August 29, 1956 – June 28, 1993) was born Jesus Christ Allin, so named by his Christian father, who claimed to have had a vision of his son being a powerful man, likened to the Messiah. (The shortening of his name to "GG" was born out of his brother Merle's mispronunciations.) His mother left the marriage, following years of abuse, and took GG and Merle with her. She even went so far as to change his name to Kevin Michael Allin, to keep him from being bullied in school. Unfortunately, her attempt ultimately failed - on top of being a poor student, GG was constantly bullied for not fitting in, so to rebel, GG would start cross-dressing to school.

Inspired by rock & roll at an early age, GG began playing drums for local bands, and he and Merle formed a band called Malpractice. It gave GG his start in the music business, which eventually resulted in him fronting The Jabbers starting in 1977. Their first album, Always Was, Is, And Always Shall Be was released in 1980. Taking more of a Pop Punk-ish direction than his later albums, it remains likely his least controversial album.

Allin's increasing mental instability, drug abuse (it's been said that he'd take any drug put in front of him), and antagonistic behavior eventually resulted in him splitting from the Jabbers in 1984, ending the longest tenure he'd ever have with a band. GG went on to front several underground Punk Rock bands, such as the Scumfucs, the AIDS Brigade, and the Cedar Street Sluts, and recorded numerous albums that are now out of print. As the 1980s progressed, his live shows became more extreme in nature thanks to GG's unquenchable desire to shock and provoke. It culminated at a 1985 show in Peoria, Illinois, where after taking laxatives earlier that day, he defecated on-stage, and the disgusted reaction of everyone in attendance convinced the antisocial GG to make it a regular part of his act.

His personal philosophy became extremely individualist and anarchist, once referring to himself as the 'last true rock & roller,' whose purpose on Earth was to make rock & roll music dangerous again. True to his word, his concerts were some of the most infamous that punk rock had to offer, for being confrontational, scatological and incredibly violent. GG would frequently perform naked, self-harm, defecate and perform coprophagia on stage, and either physically or sexually assault audience members, male or female. Even putting aside all this mayhem, there was also the matter of GG's songs. They were simply callous and misogynistic while he was in the Jabbers, but afterward, he embraced shock value as a public statement in and of itself, and began writing loud, fast songs about misogyny, murder, self-harm, drug and alcohol abuse, blasphemy, criminal sexual conduct, and of course, overthrowing American society. GG preferred to express all this debauchery through loud, three-chord punk rock with rock-bottom production values, but he actually showed some ambition later in his career, when he dipped his toe into Country Music and Spoken Word.

Despite being such a mentally unstable and proudly repugnant human being, GG did have a cult following, whether from the outermost fringes of society, or just extremely dark-humored people who loved the ugly spectacle (both camps persist to this day). It should come as no surprise that due to GG's antisocial behavior, on stage and off, he wound up serving a significant amount of jail sentences, the longest of which was for the alleged assault of a female fan.

One of his most infamous claims was that, on Halloween in 1989, he would commit suicide on stage, in order to make a statement about choosing your own fate and ending when one is at one's peak. He was in prison when the day arrived, and in fact, a similar situation would repeat for a few years afterward. When asked why he didn't follow up on the threat, he responded with a now-famous quote:

In 1993, GG had the chance to clarify his master plan for a national audience on the short-lived talk show The Jane Whitney Show, where in between blasphemous and misogynistic diatribes, threats to the audience, and claims that he sleeps with underage girls and animals, he specified that he planned to blow himself up at one of his shows, and take audience members with him. This appearance wound up being his last interview.

For all his boasting over the years, GG never did wind up making his grand exit. On June 27, 1993, GG Allin and his most recent backing band, the Murder Junkies (featuring his brother Merle on bass), performed in New York City at The Gas Station, promoting their recent album Brutality And Bloodshed For All. After spending hours doing cocaine, GG took the stage, and put on such a chaotic show (typical for GG), that the venue cut his power (also typical for GG) after only two songs. A naked GG trashed the venue, and escaped through the crowd, narrowly avoiding police. Seeking refuge at a friend's apartment, he and friends would stay up partying and ingesting drugs until all hours of the night. The next morning, GG was found unresponsive, and pronounced dead at the scene by paramedics, from a heroin overdose. He was 36.

GG Allin, alongside the Murder Junkies, were the subject of the documentary Hated. note GG saw a screening of this movie days before he died. He never got to see the film in full, because he threw several beer bottles at the movie screen, one of which injured a woman in the process. The screening halted, and GG escaped before the police arrived. Nevertheless, GG liked it, and hugged the director the day after screening. A second documentary, GG Allin: All In The Family, was released in 2017, and centered around Merle Allin as well as his and GG's mother, and how they deal with being part of GG's rather colorful legacy decades later. Merle still plays with the Murder Junkies, and sells GG merchandise on Facebook.

Check out a transcript of The GG Allin Manifesto here

, to get GG's own take on his music and outlook.

Partial Discography note GG's full discography is a confusing mess of reissues and compilations, but these are considered his most notable works

"Hopefully in a hundred years, people will look back at GG and say, well, he's the one who started this whole... Y'know, rebellion, and... y'know, and this whole war, and that's why rock & roll has come back around and evolved and gotten to be rock & roll again, y'know?"
~ Merle Allin, from the documentary Hated.