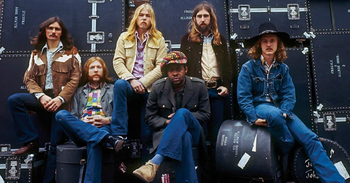 The Allmans' classic lineup in 1971. From left to right:
Dickey Betts, Duane Allman, Gregg Allman, Jaimoe,
Berry Oakley, and Butch Trucks.
"The road indeed goes on forever. So stay calm, eat a peach and carry on..."note on screen message after the end of their final concert.
Advertisement:

One of the progenitors of Southern Rock music (although they themselves disliked the term) and also one of the pioneering jam bands, The Allman Brothers Band originally consisted of the brothers Duane and Gregg Allman, guitarist Dickey Betts, bassist Berry Oakley, and drummers Butch Trucks and Jai Johanny 'Jaimoe' Johanson. Founded in Jacksonville in 1969, they went two years in their original incarnation until Duane Allman was tragically killed in a motorcycle accident on October 29, 1971. Remaining lead guitarist Dickey Betts filled in for Duane and the group remained together, eventually adding pianist Chuck Leavell, but about a year later, they lost another member, bassist Berry Oakley, also to a motorcycle accident.

The band limped through a few years fueled by drug scandals (including the arrest of Gregg Allman, though he avoided trial by testifying against some of his friends and colleagues). Afterward, the band broke up for a short time, only to reform in 1978 with a new album and a few new members.

Though the faces in the band changed over the years, The Allman Brothers Band always delivered strong southern rock, heavily influenced by the blues. The band celebrated its 40th anniversary in 2009. Their associated acts include Gov't Mule (Warren Haynes' band) and The Derek Trucks Band / Tedeschi Trucks Band (the former focusing more on World Music and African influences, while the latter is slightly more bluesy and allows the married Tedeschi and Trucks to tour together.) Their notable songs include "Ramblin' Man", "Midnight Rider", "Melissa", "Blue Sky", "Whipping Post", and "Jessica", among others.

The group announced their separation at the end of 2014 and performed their final concert on October 28, 2014. The deaths of Gregg Allman and Butch Trucks in 2017 has most likely closed the door on any further reunions for good and leaves Johanson and Betts as the two surviving founding members of the band.