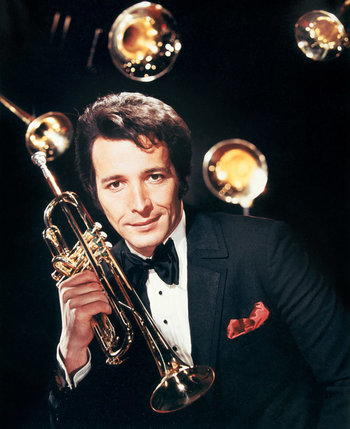 Herb Alpert (born March 31, 1935) is an American trumpeter, composer and producer best known for his instrumental albums - especially with The Tijuana Brass - and for being the cofounder of A&M Records alongside businessman Jerry Moss, thus A&M after their respective initials. Born to a family of musicians, he was initially trained to play the violin before becoming a trumpeter at the age of eight, and during the fifties was part of the USC Trojan Marching Band.

Shortly after the foundation of A&M Records in 1962, he released his first single "The Lonely Bull" after overdubbing a trumpet over an existing trumpet track as written by Sol Lake and added a cheering crowd and additional ambient sounds to emulate the scene of a bullfight. The single went on to reach Number 6 on the Billboard Hot 100, and within the year he completed his first album under Herb Alpert & The Tijuana Brass, The Lonely Bull. Starting simply as Alpert overdubbing an additional trumpet line to emulate the mariachi sound, demands for live appearances led to additional musicians being auditioned. Over the next seven years The Tijuana Brass would release twelve albums, also releasing hit singles like "A Taste of Honey", "Whipped Cream", and "Spanish Flea", as well as "This Guy's in Love With You", a Billboard number-one hit credited solely to Alpert. The release of their fifth album Going Places was accompanied by an early animated music video called A Herb Alpert & the Tijuana Brass Double Feature, featuring "Spanish Flea" and "Tijuana Taxi".

After initially disbanding the Tijuana Brass in 1969, Alpert had himself a lucrative solo career for the next three decades, during which he became the first (and to this day only) act ever to hit #1 on the Hot 100 with vocal and instrumental pieces.note Respectively "This Guy's in Love With You" (1968) and "Rise" (1979). Barry White arguably qualifies, but his instrumental #1 ("Love's Theme" from 1973, which he wrote) was credited solely to his backing Love Unlimited Orchestra. White's vocal #1 was "Can't Get Enough of Your Love, Babe" in 1974. He also started a second incarnation of the Tijuana Brass to release two albums in the mid-seventies, and had a third perform for athletes in the 1984 Summer Olympic Games. He won a Grammy Award in 1966 for "A Taste of Honey", was awarded the National Medal of Arts in 2013 and was given a lifetime achievement award alongside Jerry Moss in the 2006 Rock & Roll Hall of Fame inductions for their record label work. He also provided arts endowments for the California Institute of the Arts and University of California, Los Angeles.