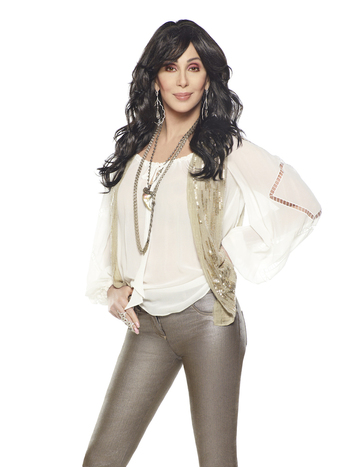 "I've always taken risks, and never worried what the world might really think of me."
Advertisement:

Cher (born Cherilyn Sarkisian; May 20, 1946) is a prolific American entertainer who has gained fame as a singer, actor, presenter and philanthropist in the course of a career spanning over fifty years.

She originally entered the spotlight in The '60s as one half of Sonny & Cher, a Pop/Folk duo in which she performed with her then-husband Sonny Bono. They had a major hit with "I Got You Babe" and co-presented a successful television show with The Sonny and Cher Comedy Hour, and even had a few new hit songs, but eventually they decided to go their separate ways both personally and professionally. In The '70s, Cher scored solo hits and became a popular figure in the Disco genre, but when that scene collapsed, her attempts to switch to a more contemporary AOR sound fell flat.

Instead, she spent The '80s primarily establishing herself as an actor, earning an Academy Award nomination for her appearance in the film Silkwood and winning the Best Actress Oscar for Moonstruck. With her success in this field solidified, she returned to music, revisiting her earlier attempt at Arena Rock to great acclaim and achieving further success as a singer in The '90s with the number one dance hit "Believe" (credited with making Auto-Tune mainstream).

Her achievements include an Emmy Award, a Grammy Award, an Academy Award, several Golden Globes, and four number one singles on the American chart. She holds a record as the artist with the longest gap between their first and most recent number one hits.