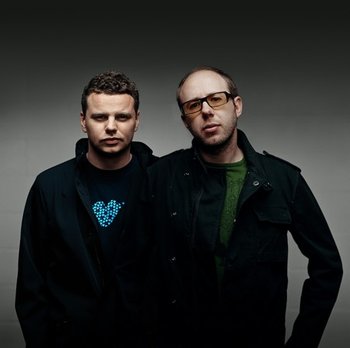 The Brothers gonna work it out.
Advertisement:

The Chemical Brothers are a British Electronic Music duo, consisting of Ed Simons and Tom Rowlands. Active since 1991, they are credited with bringing the "Big Beat" subgenre to the mainstream, alongside The Prodigy, Fatboy Slim, The Crystal Method, and associated acts.

From 1992 to 1995, Simons and Rowlands called themselves The Dust Brothers, after the US production duo known for their work with Beastie Boys. While it was chosen as homage to the latter, the original Dust Brothers threatened legal action over the name. From then on, Simons and Rowlands were known as The Chemical Brothers, starting with their debut album, Exit Planet Dust.

They are notable in being one of the few truly arena-sized electronic acts in the world. Their live acts comprise large screens displaying psychedelic images, strobe lights, and lasers that project over the crowd.

They have also played at many major festivals, including Glastonbury, Fuji Rock, Reading, the HFStival, and Leeds festival. They currently hold the record for most gigs performed in a year at the Brixton Academy.