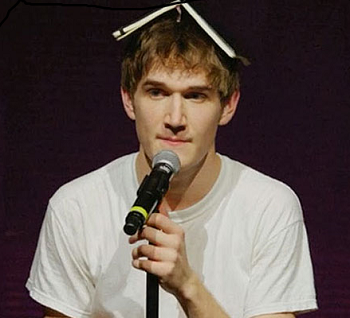 "I find myself so punchable."
"This is Bo Burnham. He is 22 years old. He's a male. And he looks like the genetic product of a giraffe having sex with Ellen DeGeneres. He has a gigantic head and tiny nipples. He's isolated himself, over the last 5 years, in the pursuit of comedy, and in doing so has lost touch with reality. You're an asshole, Bo. You hear me? You think you know better than me. You think you know better than everybody. You will die alone, and you will deserve it. But in the meantime, you might as well tell those silly jokes of yours. See if that helps."
— Opening Monologue for what.
Advertisement:

Robert Pickering "Bo" Burnham (born August 21, 1990) is a comedian, singer-songwriter, poet, actor and filmmaker that specializes in stand-up and music.

Bo started out by posting two videos of himself performing songs in his bedroom to YouTube in 2006 so his family could see them, but they became so popular that he decided he would make more. Through his videos, he established a comedic style revolving around cheery piano/guitar music with dark lyrics poking fun at taboo topics such as race, gender, sexuality and religion, alongside getting shock value out of subjects as far controversial as white supremacy and disabilities (although he now looks on this aspect of his early work with chagrin).

After doing a performance for Comedy Central in January 2008, Bo signed a four-record deal with their record label that same year, and his career largely continued from there in stand-up, where he began making a bigger name for himself, and his style of comedy steadily evolved to rely less on cheap shocks and lean more into intelligent satire. Apart from releasing several stand-up specials, he also did a bit of work in supporting roles for a handful of films, and in 2013, his work extended further into TV (starring in and co-creating Zach Stone Is Gonna Be Famous, a short-lived MTV comedy series about a guy who tries to become an Internet celebrity) and literature (releasing a humorous poetry book called Egghead; or, You Can't Survive on Ideas Alone).

Bo publicly stated on several occasions that due to increasing struggles with performance-related anxiety, he would take a break from his stage work following the release of his third special Make Happy and move into working on projects for other people rather than himself. While this took the form of continued supporting roles in films alongside directing specials for other comedians (including Jerrod Carmichael and Chris Rock), it most prominently resulted in his debut as a film writer-director in Eighth Grade, distributed by A24 in 2018.

In April 2021 (almost five years after the release of Make Happy), his comedy hiatus came to an end with a surprise announcement that a new special titled Inside was almost finished, shot and performed alone in the wake of world events and to be released through Netflix. It was released on May 30, and was further screened in select American theaters between July 22 and July 25. Exactly one year following its release, an additional hour of behind-the-scenes content and original bits and songs that didn't make the final cut, titled The Inside Outtakes, was released for free on his YouTube channel. Tropes relevant to either should be added to the Inside-specific page linked above.

Bo's channel can be found here

, with selections of his earlier work as well as the entirety of his what. special for free. Both what. and Make Happy are also available on Netflix, while his debut special Words Words Words is available on Paramount+.

Welcome to the tropes; this is Bo, these are his tropes, and Bo likes to trope like THIS!