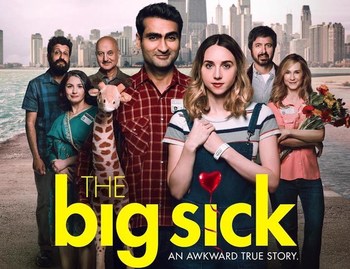 Kumail: So... to fully know I love someone, I have to cheat on them?
Terry: Out loud, it sounds stupid. Eh, it's... yeah, that's terrible advice.
Advertisement:

The Big Sick is a 2017 American romantic comedy-drama film directed by Michael Showalter based on the real-life relationship of screenwriters Kumail Nanjiani and Emily V. Gordon.

Kumail (Nanjiani, basically playing himself) is a stand-up comedian looking to make it big, over the opposition of his traditional Pakistani family, who want to push him into an arranged marriage as soon as possible. However, when he hooks up with a girl named Emily (Zoe Kazan) at one of his shows, and they insist that nothing will ever happen between them again, a tale of heartbreak, self-discovery, family, and the love spread everywhere between unfolds and changes their lives forever.