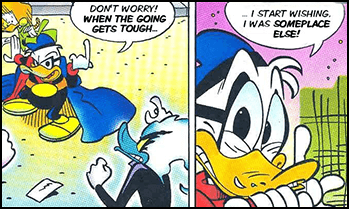 This is what happens when someone takes a well known phrase or saying, and then decides that it doesn't convey quite as much information as it needs to. So the speaker adds a little bit on the end, usually with the modifier "But", usually either missing the point or totally reversing the original meaning of the phrase.

Related to the Ice-Cream Koan, but differs in that while the first part of the phrase is valid, the second part is clearly tacked on by the speaker. Often said by a Seemingly Profound Fool in some of his more fauxlisophical moments. You Can't Make an Omelette... and When Life Gives You Lemons... are common victims of this trope. Not to be confused with attempts to separate the face-value meanings of Loaded Words and slogans from the connotations with which they are loaded.

... and your enemies way the hell somewhere else.

... and your enemies way the hell somewhere else.