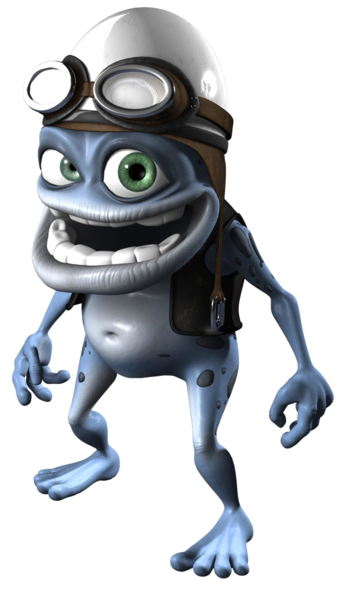 Pictured: the most controversial ringtone mascot made a music artist. Not Pictured: his penis.
"This is the Crazy Frog!"
— Axel F
Advertisement:

Crazy Frog (also known as The Annoying Thing) began in 1997 as a widely-shared audio file of Swedish teen Daniel Malmedahl imitating the two stroke engines on his friends' motorcycles. In 2003, animation student and fellow Swede Erik Wernquist used the sound to create "The Annoying Thing," a minute-long computer animation test, pairing the sound up to the design of a grotesque frog-like creature. Wernquist credited the audio to "anonymous" at the time, but later credited Malmedahl when he saw the animation and gave Wernquist permission.

A year later, the two creators sold the character and sound to ringtone service Jamba!/Jamster who rechristened the character "The Crazy Frog," turning the sound into a hugely successful ringtone. The character was popular enough that Jamster eventually produced a techno cover of Harold Faltermeyer's "Axel F" with samples of the sound, complete with a music video. It was popular enough to keep Coldplay's "Speed Of Sound" off the #1 spot on Billboard and eventually warranted two albums worth of similar covers. A cover

of the synthpop classic "Popcorn" had some success, but it was mainly limited to Europe.

The character spawned a few toys and two video games before fading into obscurity.

After a long period of inactivity, his YouTube channel (found here

) suddenly became active once more in 2018, with a documentary on the character's creation being released and new activity popping up on various parts of his account. This would eventually culminate in the announcement of a new album

The Crazy Frog contains examples of: