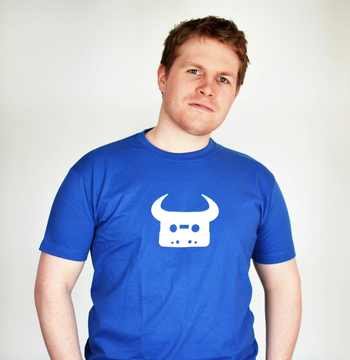 Daniel G. L. Bull (born 27 March 1986), also known as Dan Bull or "Douglby"note the pronunciation of his initials "DGLB", is an independent English musician and YouTuber most well-known for his video game-themed hip-hop music. You can find his channel, where all of his songs are available, here

He first attained notoriety on the Internet for his unusual stance on the Digital Piracy Is Evil debate: he actually supports filesharing software, and writes musical open letters to various English politicians and musicians on the other side of the debate. His first such letter, to musician and (in the vein of Metallica's Lars Ulrich) anti-piracy crusader Lily Allen, was linked on The Pirate Bay, Piratbyrån, and various other major filesharing sites and his popularity skyrocketed in a very unusual (but large!) demographic.

The strange part is that after he released his first complete album, Safe, on BitTorrent... the sales went up even further. That is correct: because he released the music for free download to anyone, more people bought it.

You might also know him for both the pre- and post-reboot ending themes of Nerd³, or for his appearances on Epic Rap Battles of History as Jack the Ripper and Winston Churchill. Aside from this, he has a lesser-known gaming channel here