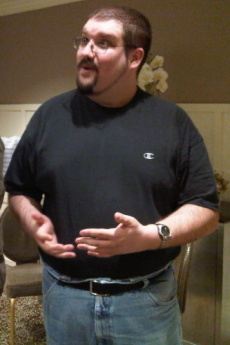 Bob "Moviebob" Chipman, also known as "The Game Overthinker", is a self-proclaimed "Z-list internet celebrity" who maintains a YouTube channel and a website

and formerly contributed to Geek.com

and The Escapist. He rips apart bad movies, but his particular shtick is giving analyses of gaming culture and the industry, in a style closely reminiscent of college-lit-class style "close reading", overlaid with appropriate (and sometimes humorous) images. Bob's analyses are very much like you would see from a troper. Indeed, he's written an article

that refers to "a genuinely wonderful website called TV Tropes".

As a method to going independent upon leaving work at Escapist, Bob has set up a Patreon page

For an episode and story arc guide to The Game Overthinker, as well as a list of all the films he's reviewed and discussed, see the Recap page.

Tropes appearing in Bob's works include: