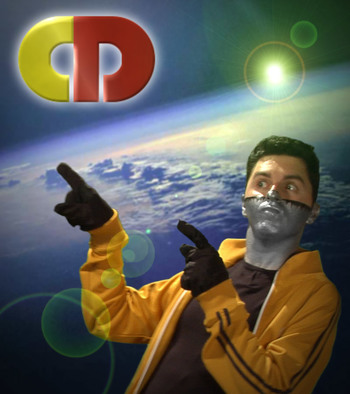 Love with your heart, use your head for everything else!
"You know, looking at the world in an objective and empirical way is key to a healthy and well balanced life. Don't get me wrong, dreaming, wishing and hoping are basic and vital to human nature, and suspension of disbelief is super fun, but only as long as you can clearly tell the difference between belief and reality. Reality is real. Your beliefs are in your head."
— Captain Disillusion
Advertisement:

Captain Disillusion is a web video series created by Latvian-born independent filmmaker Alan Melikdjanian. The series was started on September 18, 2007, and is still going on today.

The titular Captain D is a skeptic from the future who uses his superior critical thinking powers and intimate knowledge of digital editing and effects to debunk viral hoax videos on the internet. These videos include but are not limited to ghosts

, and much more. But Captain D isn't alone, as he has to put up with an annoying living Lens Flare named Mr. Flare and, more occasionally, a giant floating head goddess named Holly.

. He also has a Patreon which can be found here.