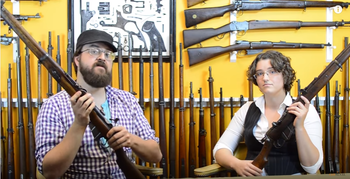 Othais and Mae and their Wall of Weapons

Each Primer episode presents a detailed examination of the development, design, dissasembly, and service history of a particular military weapon or series of weapons, including a live fire demonstration. Since the video series started as a partner channel to The Great War, the C&Rsenal channel began by concentrating on military firearms used in World War I.

In their Anvil series of episodes, gunsmith Mark Novak demonstrates techniques for repairing and restoring the vintage weapons seen on the show.

Tropes appearing on this channel: