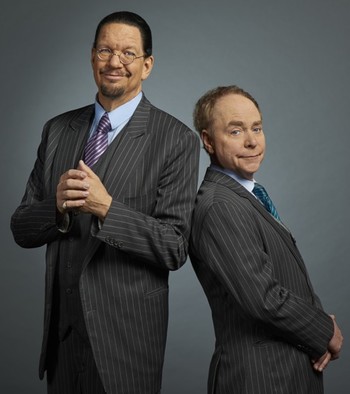 The tall guy (Penn Jillette) distracts you so you won't watch the little guy (Teller)...
"One of the things that Teller and I are obsessed with, one of the reasons that we're in magic, is the difference between fantasy and reality."
Advertisement:

Penn & Teller are an American double-act, comedians and stage magicians, with a regular gig at the Rio Hotel and Casino in Las Vegas.

Penn Fraser Jillette (born March 5, 1955) is the tall, talkative one with dark hair and glasses. Teller (born Raymond Joseph Teller, February 14, 1948) is the short one who never speaks and makes amusing facial expressions on the frequent occasions when Penn exposes him to danger. They were introduced to one another by a mutual friend in 1975. Ever since then, they've done most of their work together, developing their own rather quirky style of magic.

The pair have a wide fraud-busting streak, which got its widest exposure in their Showtime TV show, Penn & Teller: Bullshit!. A running theme in their work is truth, lies and deception, with many parts of their stage magic routine built around lampshading the fact that magic is all about deceiving the audience. Many of their tricks also play on the audience's visceral reaction to tricks that appear dangerous but are in fact completely safe, celebrating the fantasy that two guys can shoot guns into each other's mouths and emerge from it completely unharmed.

Aside from their various stage shows, Penn & Teller's body of work includes:

Works by Penn & Teller with their own pages:

Otherwise, Penn & Teller and their work provide examples of: