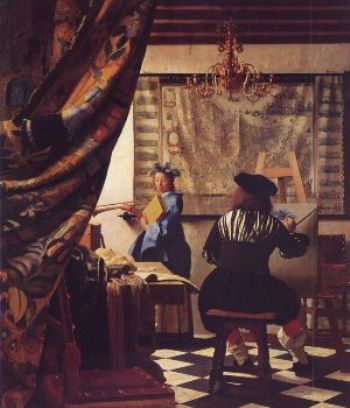 Johannes Vermeer (October 1632 – December 1675) was a Dutch 17th century painter who, together with Rembrandt van Rijn and Frans Hals is one of the most famous Dutch painters of all time. His work is considered to be among the finest examples of realistic painting, especially the way he used color and the illusion of light in his work. Most of his life is Shrouded in Myth. Not much is known about his private life, let alone what he might have looked like. This only adds to the mystery of his almost inhuman perfect painting.

His work Girl with a Pearl Earring has its own page. He is furthermore best known for "The Allegory Of Painting", "The Milk Maid", "View of Delft", "Girl With Wine Glass", "The Lacemaker" and "The Love Letter".