Series / The Smell of Reeves and Mortimer 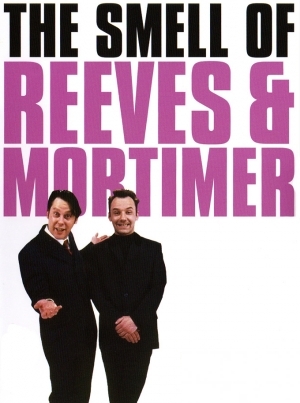 "Like a shrimp in a suitcase lying on a window ledge,
Like a pair of tartan slippers and they're underneath a hedge,
Like a scout master at daybreak putting peanuts in his glove,
Like a specially formed ice arch for climbing over doves,
Like a sardine in a hair net and he's staring at a priest...
These things you'll find constantly irritate our minds!"
— Opening song for episode 1, very much setting the tone
Advertisement:

The second surreal comedy show put together by Vic Reeves and Bob Mortimer, following Vic Reeves Big Night Out and their Channel Hop from Channel 4 to the BBC. Considered to be some of Vic and Bob's best work. Had two series, in 1993 and 1995.

Rather than Big Night Out`s parody of variety shows, The Smell was a sketch show interspersed with Vic and Bob sitting at their desk and doing surreal things before an audience, a format which would later be built upon for Shooting Stars. Filling the role of Les as assistant was the incoherent Uncle Peter (comedian Charlie Chuck) and guest actors included Matt Lucas and David Walliams (later of Little Britain) and Simon Day, Charlie Higson and Paul Whitehouse (later of The Fast Show). The show also contained spoofs of then popular TV programmes, as well as adverts for bizarre products the duo were supposedly peddling.

In 1999 the two revived the format under the name Bang Bang It's Reeves and Mortimer, which will also be covered here as it is essentially a third series in all but name. Even more surreal than their earlier work, Reeves and Mortimer considered it superior but it was less popular with the fans, perhaps because each episode was weighed down by a large part of it being devoted to a single recurring setting called The Club, which was somewhat divisive. Bang Bang also developed some characters and concepts that had been introduced in The Smell, such as Tom Fun.

The duo returned to the sketch format yet again with Vic and Bob's Big Night Out, which can be summed up as a mishmash of The Smell and Big Night Out, in 2018.

This TV series displays examples of:

Vic has an imagine spot where he and Bob partake in a race across Scarborough beach to the tune of Chariots of Fire, which swiftly turns into an advert for asparagus.

Example of:
Parodies of Fire

Vic has an imagine spot where he and Bob partake in a race across Scarborough beach to the tune of Chariots of Fire, which swiftly turns into an advert for asparagus.