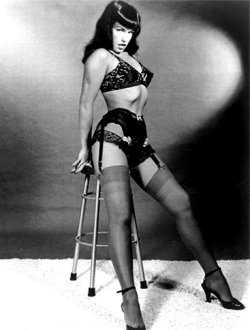 Black and white has never looked so gorgeous.
"Oh Bettie!
The world was not quite ready
For you in your satin teddy..."
— Olivia Olson, "Oh, Bettie"
Advertisement:

She was famous for her fetish modelling and often called the "Queen of Pinups". Her signature look has influenced several celebrities from Katy Perry to Dita Von Teese and she was one of Playboy Magazine's earliest Playmate of the Months. Even Batman antagonist Poison Ivy was created as her Expy. Her fame was mostly in the 1950s but experienced a resurgence of popularity the 1980s that has carried through to the present day.

Bettie disappeared at the height of her popularity in the early 1960s, leading to numerous rumors that she had died. In the late 1990s, she was discovered alive and well, though living in poverty and completely unaware of her cult following. Various admirers (including Hugh Hefner) united to insure that Bettie would receive royalties for reproduction of her image. With this security, she lived comfortably until her death in 2008, though she made no public appearances, stating that she preferred fans to "remember [her] the way [she] was."

Dynamite Comics has her starring in her own series where she ends up having adventures between modeling. Getting involved with strange mysteries ranging from spies, giant monsters, or even aliens.