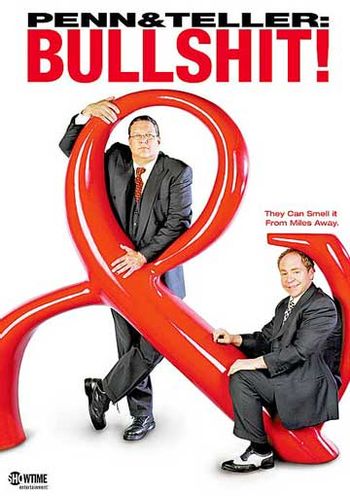 They can smell it from miles away.
"You'll notice more obscenity than we usually use. That's not just because it's on Showtime, and we want to get some attention. It's also a legal matter. If one calls people liars and quacks, one can be sued and lose a lot of one's money. But "motherfuckers" and "assholes" is pretty safe. If we said it was all scams, we could also be in trouble. But BULLSHIT, oddly, is safe, so forgive all the bullshit language. We're trying to talk about the truth without spending the rest of our lives in court because of litigious motherfuckers."
— Penn Jillette
Advertisement:

The Showtime original Penn & Teller: Bullshit! (or P&T:B.S!), hosted by comedians and stage magicians Penn Jillette and Teller, follows in the footsteps of great men like Harry Houdini and The Amazing James Randi: the pair debunks popular misconceptions and exposes both liars ("motherfuckers") and faulty science ("bullshit").

To do this, P & T interview proponents of different views in the fields they debunk, then add facetious voice-overs that mock whichever side they disagree with and introduce the people who make money from it as "assholes". They occasionally throw in some non-scientific experiments and point out official policies, rules, and methodologies of various organizations that point out the hypocrisy of said organizations. Since both Penn and Teller identify as Classic Liberals ('Libertarians'), they never fail to use the show to advocate their viewpoint — but they admit their bias and insist that the viewer should make up their own mind based on the information presented.

The pair tackled a wide variety of subjects (and offered their stances on said subjects) in the show's run, such as:

This short list gives you an idea of the subjects P & T go after: they target the liars and faulty sciences that most people believe in, then expose why people benefit from those misguided beliefs (and make fun of everyone in the process). The duo even admitted in the "Recycling" episode that they, and many other people on their staff, believed in recycling (in Penn's own words, "Everybody got a gris-gris"note a voodoo good-luck charm). The "NASA" episode opened with P & T reading some of their hate mail before they agreed to call "bullshit" on something they cherished.

As the careers of Houdini and the Amazing Randi demonstrate, stage magicians — who know how illusions and "magic" work — can easily expose fake miracles and phony paranormal events better than anyone else. Since they have a familiarity with illusions and the perceptions thereof (particularly in the usage of misdirection to control people's attention), magicians can also deal with things like UFO sightings and psychic photographs without too much issue. These qualities do not make P & T experts in most of what they debunk, however, and the pair often expound their opinions as loudly as possible while they call on an actual expert to help debunk their subject (a tactic they have criticized others for). In the "Secondhand Smoke" episode, when the pair discovered that they used data compiled by an "expert" with significant ties to Big Tobacco, the skeptic community criticized the show and forced them to apologize.

Penn & Teller wanted to put on The Bullshit of "Bullshit!" as the final episode; it would have pointed out their own inaccuracies, presented criticisms of the show, and probably have ended on a call for better critical thinking from everyone. Showtime cancelled Bullshit! after eight seasons before this episode could come to fruition, though.

The "lawyer-friendly" format as laid out in the page-topping quote paid off in the end: nobody ever managed to successfully sue Penn & Teller over the show.

"You can't heal a broken heart by pretending it's not broken."