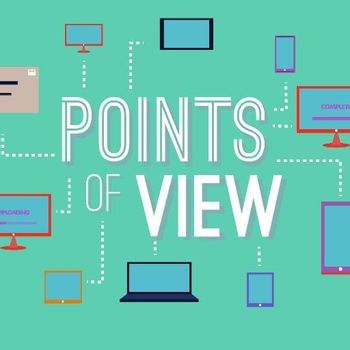 One of the series' many title cards.
"When the Russians feel strongly about an issue they form a bloody revolution — the British write a Strongly Worded Letter to Points of View."
— Victoria Wood
Advertisement:

Often called the single dullest thing on British television, this short BBC show consists of a presenter introducing letters (read in voiceover), phone calls and more recently emails and forum posts, from the sort of people who would sit down to write to Points of View. A less witty and cryptic way of saying that would be that it is the BBC's complaints and praise letterbox, mostly full of letters from people who probably also fill the opinion columns of newspapers. A Guilty Pleasure for some and a matter of ridicule for many others.

It was originally meant to be a five-minute show to plug holes in the schedule when launched in 1961, but it has grown to be a 15-minute show on most Sundays.

Often parodied by British comedians; Monty Python's Flying Circus, Not the Nine O'Clock News and A Bit of Fry and Laurie among many others have send-ups of the programme.