Series / A Bit of Fry and Laurie 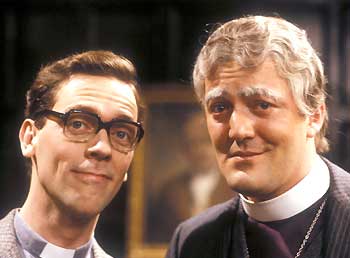 Dammit Peter, they're gonna put Uttoxeter on the map!
Advertisement:

A Bit of Fry and Laurie, commonly known as ABOFAL or "Boffle", is a British television series starring former Cambridge Footlights members Stephen Fry and Hugh Laurie, broadcast on BBC2 and then BBC1 between 1989 and 1995. It ran for four series, and totalled 26 episodes, including a 35 minute pilot episode in 1987. Both Fry and Laurie have expressed interest in working together again, but this has not yet taken place, due to both men's busy schedules.

The programme was a sketch show cast in a rather eccentric and at times high-brow mould. Elaborate wordplay and innuendo formed the cornerstone of its material; some sketches deliberately threatened to cross the line into vulgarity, but would always finish just before reaching that point.

It was a progressive show, playing with the audience's expectations. For example, it frequently broke the fourth wall; characters would revert into their real-life actors mid-sketch, or the camera would often pan off set into the studio. In addition, the show was punctuated with non-sequitur vox-pops in a similar style to those of Monty Python's Flying Circus, often making irrelevant statements, heavily based on wordplay. Laurie was also seen playing piano and a wide variety of other instruments, and singing comical numbers.

The first three series were broadcast on BBC2 between 1989 and 1992, and were well-received. The fourth series was shown on BBC1 in early 1995. It had been recorded whilst Stephen Fry was simultaneously preparing for his West End debut (in Simon Gray's Cell Mates), and a combination of the extra workload and poor reviews for his stage performance led to Fry having a nervous breakdown and fleeing to Belgium. The series met with mixed reviews and the show was not renewed.

Currently, Fry and Laurie have started working together again on an adaptation of Oscar Wilde's The Canterville Ghost. Both have also recently stated that they are definitely considering making a fifth series. But both are, however, also reluctant to commit to any specific promises.

A Bit of Fry and Laurie provides examples of the following tropes: