Driver of a Black Cab 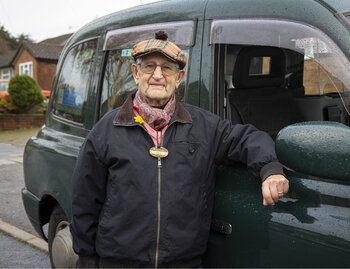 Note the green badge. This is the real deal.
String 'em up! It's the only language they understand...
Advertisement:

Although in the US, taxi drivers often have a Funny Foreigner stereotype, it's quite different (in a sense, the antithesis) in England. Often ex-police, the drivers of black cabs (or to be technical, Hackney Carriages

) are known for being very open with their views on what's wrong with society today (immigrants, the youth, etc.) and their proposed solutions (public hangings and floggings). Not to be confused with black people who drive cabs, toward whom this character might not be congenial,note This is heading for Discredited Trope status in modern times, as London has one of the highest ratios of ethnic minorities to white people in the whole country and it's much easier to be prejudiced against an abstract concept than against people you've actually met. or with Uber drivers who offer the company's luxury service in black-on-black sedans.

Another stereotype is that cab drivers like to drop the names of celebrity passengers, as in "I 'ad that Liam Gallagher in the back of my cab last Friday".

The test taken to qualify as a Black Cab driver in London is called "The Knowledge,"note  as in, the Knowledge of London Examination takes at least three years to study for, and requires a ridiculously intuitive knowledge of London geography - which is all the more remarkable since London is what happens when one city spends two thousand years growing, absorbing smaller surrounding villages, towns, and cities, while being intermittently flooded, burned to the ground, and bombed into oblivion, resulting in a form of urban kudzu. It gets to the point where the memory centres of a cabby's brain are recognisably larger than those of a normal person. As Bill Bryson put it, "[London cabbies] would sooner entrust their teenage daughters to Alan Clark for a weekend than admit they've never heard of your destination," but chances are they have. Once they receive their "req" and pass, they earn the right to wear the coveted green badge.

A made-for-TV comedy The Knowledge about those aspiring to be London cabbies and their attempts to pass "The Knowledge" exam was made in 1979.

I 'ad that Fast Eddie in the back of my cab the other day! Very important gentleman...