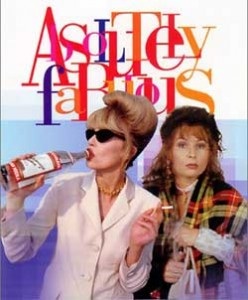 "It is a miracle that I can walk at all.
I bless the wonder of life, and the newness of living."
–Patsy Stone
Advertisement:

Absolutely Fabulous, often abbreviated as AbFab, is a British sitcom about the misadventures of Edina Monsoon (writer Jennifer Saunders) and Patsy Stone (Joanna Lumley), two alcoholic party girls who are so far over the hill they've crossed the valley and started up the next hill. Other major characters include Edina's elderly scatter-brained mother (June Whitfield), her level-headed and long-suffering daughter Saffron "Saffy" (Julia Sawalha), and Cloudcuckoolander secretary Bubble (Jane Horrocks).

It features copious amounts of crude humor, slapstick, alcoholism and drug abuse. The plots generally center around Edina's attempts to jump onto the latest trend or to have a good time, Patsy egging her on and encouraging her bad behavior, and Saffron's futile efforts to rein in the insanity and keep her mother on the straight and narrow. Due to Edina's (oft-neglected) career in public relations, celebrity cameos were common, with some (such as Lulu, Twiggy and Emma Bunton) becoming recurring characters.

The Emmy- and BAFTA-award winning series grew out of a French and Saunders sketch featuring an obnoxious, partying mother and her sober, responsible daughter, which became the basis for Edina's and Saffron's characters. It aired on-and-off-again from 1992 to 2016, where it culminated in The Movie, which Saunders has said is the absolutely final Grand Finale.

A French film adaptation, Absolument fabuleux, starring Josiane Balasko as "Eddie" (the film's verion of Edina) and Nathalie Baye as Patsy, came out in 2001.