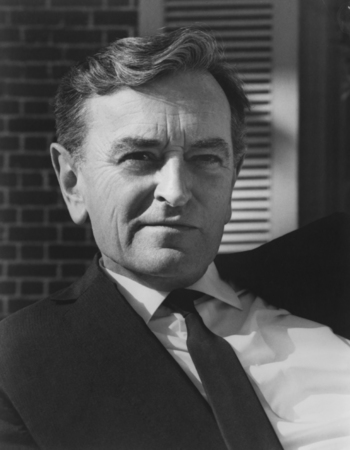 "I've just begun to dare to think I perhaps am a bit of an artist."
"Who are you?"
— an uncredited David Lean addressing T. E. Lawrence in Lawrence of Arabia
Advertisement:

Sir David Lean CBE (25 March 1908 – 16 April 1991) is widely acknowledged as one of the greatest British filmmakers of the 20th century. He is especially associated with the Epic Movie, and for good reason.

Lean was born to a Quaker family in Surrey and from very early in his career, he made films with a Brownie camera. He was The Movie Buff as a young man who adored the films of King Vidor, William Wyler, and John Ford. He eventually worked in British film studios and found his calling as an editor, including the famous George Bernard Shaw adaptions of Pygmalion (1937) and Major Barbara (1941) as well as films with Michael Powell and Emeric Pressburger. He edited 49th Parallel and One of Our Aircraft Is Missing and Powell would consider Lean the best editor he worked with.

Lean made his directorial debut with Noël Coward's In Which We Serve and found his Breakthrough Hit with his Coward adaptation Brief Encounter, regarded as the quintessential British Wartime Romance and an instant classic. He later found fame with adaptations of Charles Dickens' Great Expectations and Oliver Twist, his first films with favorite actor Alec Guinness.

Lean's career stalled temporarily in the '50s. He made several largely forgotten vehicles starring his wife, actress Ann Todd, along with a well-received but unsuccessful adaptation of Hobson's Choice staring Charles Laughton. His comeback came with Summertime starring Katharine Hepburn, a transitional film between his small-scale melodramas and later epics (it was filmed on location in Venice).

His first Epic Movie was The Bridge on the River Kwai, which earned him an Academy Award for Best Director; he won a second time for Lawrence of Arabia. Both films were produced by Sam Spiegel and featured several of the same actors, including the ubiquitous Alec Guinness. They were box office hits and received generally positive reviews, becoming recognized as the high points of their genre.

His production pace slowed to a halt after that and critics generally found that his later films lacked the spirit of these films. This was also a time where the Epic Movie went out of fashion. Doctor Zhivago was a huge box-office success but critics generally despised it. The scathing reviews accorded to Ryan's Daughter reportedly discouraged Lean from making films for over a decade, though in reality, he spent the '70s working on several failed projects, notably a remake of Mutiny on the Bounty (which eventually mutated into The Bounty, a much smaller-scale project helmed by a different director).

In 1984, Lean's reputation was revived by A Passage to India, which received universal critical acclaim and respectable box office. The 1989 restoration and re-release of Lawrence of Arabia also enhanced his stature. In the final years of his life, he had planned a comeback with an adaptation of Joseph Conrad's Nostromo; it took him several years to get the funding, cast, and crew in place, and then he died a few weeks before production was to begin.

Lean is regarded as one of the greatest film-makers of all time and counts the likes of Martin Scorsese, Steven Spielberg, Stanley Kubrick, Spike Lee, and others among his fans.