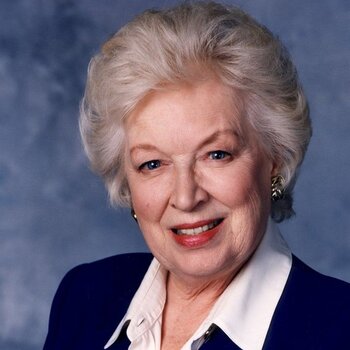 "I love work - but there's another reason why I must keep on working, apart from the love of it. I have to keep earning money, because when I'm not earning it, I'm spending it."
Advertisement:

Dame June Rosemary Whitfield, DBE, (11 November 1925 — 29 December 2018), was an English actress on radio, TV and film, best known for her work alongside Terry Scott on Happy Ever After and Terry and June, and with Jennifer Saunders and Joanna Lumley on Absolutely Fabulous.

She began her career in the 1940s working on stage in the West End. In 1953, she replaced Joy Nichols in Take It from Here, a radio comedy. She also appeared in many supporting roles in television until she got her first starring role as Rose Garvey in Beggar My Neighbour. She then appeared on Scott On... from 1968 to 1974, started a close working relationship with Terry Scott.

In 1992, she first appeared in Absolutely Fabulous as Jennifer Saunders' mother and continued to play the role until the end of the series in 2012, and in The Movie in 2016.