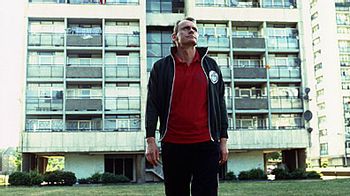 British sitcom based on a radio show. It takes place in a flat on the 15th floor of a towerblock in South London. The flat is owned by misanthropic, cynical recluse and borderline sociopath Vince Clark (Sean Lock), who is looking for a lodger. Somehow he ends up taking in wide-eyed, cheery social butterfly Errol Spears (Benedict Wong), and misery ensues.