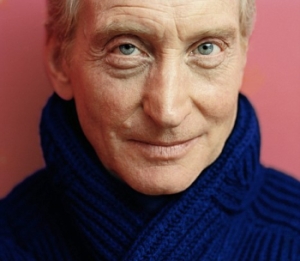 Walter Charles Dance, OBE, was born on 10 October 1946 in Redditch, Worcestershire, England. He's an an actor, director, and screenwriter who is most frequently seen playing Obstructive Bureaucrats , Villains and overall authoritative figures. Dance was a member of the Royal Shakespeare Company for several years in the 70s, and made a name for himself as a stage actor before moving on to television and film work. His big break came when he was cast as Guy Perron in Granada Television's acclaimed mini-series The Jewel in the Crown, but he's more known to international audiences for playing Lord Tywin Lannister in Game of Thrones.

He also played Dr. Clemens, the doctor of penitentiary Fury 161 who becomes Ellen Ripley's lover in Alien³ and the one-eyed hitman Mr. Benedict in Last Action Hero. Among his other roles include appearances in The Golden Child, Michael Collins, and For Your Eyes Only. In 2010, he played Havelock Vetinari in an adaptation of Terry Pratchett's Going Postal, taking the part simply because he was a huge fan of Pratchett's work. He also had a guest spot in Merlin, playing Aredian the Witch Finder, considered one of the show's best One-Shot Villains. Once a year, he makes an appearance on the celebrity quiz Big Fat Quiz of the Year, in which he reads a trashy celebrity biography (or, once most infamously, Fifty Shades of Grey) with the utmost dignity, the panel members having to guess the identity of the author. It is almost undoubtedly the best part of the show.

To date, he has directed one film, Ladies in Lavender (2004), which he also executive produced and co-wrote the screenplay for (based on a short story by William J. Locke), and is set to direct, write the screenplay for and star in an adaptation of Alice Thomas Ellis' novel The Inn at the End of the World.

In 2015, he made his grand debut into the world of video game voice-over work, voicing Emperor Emhyr var Emreis in The Witcher 3: Wild Hunt.

He is a natural choice for villainus roles due to his intense stare, imposing 6'3 stature, slender frame and, most notably, his magnificent rich, smooth voice. His characters also tend to be very snappy dressers though, by his own admission, he dresses almost entirely in jeans and t-shirts in his private life.

Charles Dance is a father and a grandfather.

He makes everything he is in better; if the production as a whole is not good, his performance will be.