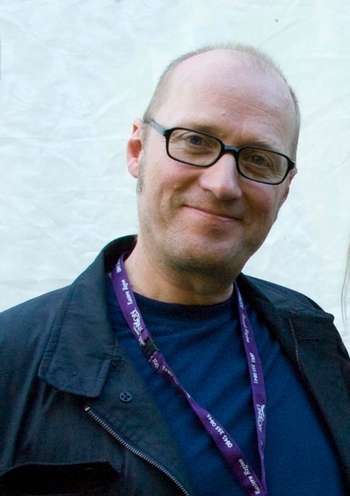 "I remember once having to stop performing when I thought an elderly man a few rows back from the front was actually going to die because he was laughing so hard."
Advertisement:

Adrian "Ade" Edmondson, also known by the stage name "Eddie Monsoon", was born on 24 January 1957 in Bradford, England. One of the brightest stars of the Alternative Comedy circuit in The '80s, Edmondson has accumulated a surprisingly large number of credits as a writer, actor, director, comedian and television presenter. He also took a break from acting between 2008 and 2016 to spend time "farming" and performing as the lead singer and mandolin player of folk punk group The Bad Shepherds.

Edmondson was, for a significant portion of his career, part of various acts with his best friend Rik Mayall.

Edmondson has been married to fellow Alt-comedy star Jennifer Saunders since 1985, and the couple have three children.

Tropes associated with his career: