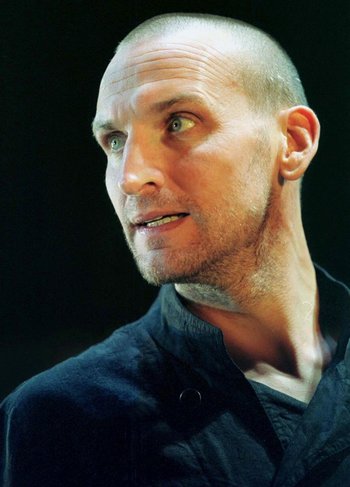 Don't Skip NINE.
"I love my accent. I thought it was useful in Gone in Sixty Seconds because the standard villain is upper class or Cockney."
—On being typecast in American films
Advertisement:

Christopher Eccleston (born 16 February 1964 in Salford, England) is an English stage, film and television actor. Most may remember him as the ninth incarnation of the Doctor in Doctor Who (2005). The shortest serving of the Doctors, he only played the part for a single series before leaving the show over creative differences and handing the role to David Tennant.

He gained fame in Our Friends in the North (along with Daniel Craig), played the new Jesus in The Second Coming (written by Russell T Davies), appeared alongside Nicole Kidman in The Others (2001), and starred with Ewan McGregor in Shallow Grave. He also had a recurring role as a tough police inspector, DCI David Bilborough, on Cracker. American audiences may recognize him as stolen-car broker Raymond Calitri in Gone in 60 Seconds (2000), the traitorous Duke of Norfolk in Elizabeth, or as Major Henry West in 28 Days Later. Or perhaps they saw him as Claude the invisible man (or didn't see him) in Heroes.

On 30 October 2005, Eccleston appeared on stage at the Old Vic theatre in London in the one-night play Night Sky alongside Navin Chowdhry, Bruno Langley, David Warner, Saffron Burrows and David Baddiel. Eccleston sat on the 2nd Amazonas International Film Festival Film Jury in November 2005. The director Norman Jewison was chairman of the Jury.

In December 2005, Eccleston traveled to Indonesia's Aceh province for the BBC Breakfast news programme, examining how survivors of the 2004 Boxing Day tsunami were rebuilding their lives.

In May 2006, Eccleston appeared as the narrator in a production of Romeo and Juliet at The Lowry theatre in his home city of Salford. The theatre company with which he performed, Celebrity Pig (of which he is patron), is made up of learning disabled actors.

In August 2006, Eccleston filmed New Orleans, Mon Amour with Elisabeth Moss. The film was directed by Michael Almereyda, and shot in post-Hurricane Katrina New Orleans, it is currently in post-production and was scheduled for a 2008 release. Also in 2006, he starred in Perfect Parents, an ITV drama written and directed by Joe Ahearne, who had directed him in Doctor Who.

Eccleston joined the cast of the NBC TV series Heroes in the episode "Godsend", which was broadcast on 22 January 2007. He played a character named Claude who has the power of invisibility, and helped Peter Petrelli with his powers.

Eccleston appeared as the Rider in The Seeker, a film adaptation of Susan Cooper's novel The Dark is Rising, which opened in the U.S. on 5 October 2007. He also appeared as the villainous Destro in the live-action G.I. Joe film: G.I. Joe: The Rise of Cobra where he proceeded to be one of the best parts of the movie.

Eccleston also appeared in an episode of The Sarah Silverman Program as Dr. Lazer Rage, the title character in a show within the show about a cult favourite science fiction hero, possibly in reference to his stint as the Doctor in Doctor Who.

So, once you've played the Doctor and Jesus, where do you go after that? John Lennon, of course.

Eccleston starred in the first episode of the BBC One drama Accused in 2010. He won an International Emmy Award for this role, becoming the first-ever actor to have played the Doctor to win television's most prestigious honor.

as Malekith the Accursed in Thor: The Dark World (2013). That same year, he would play the role of Creon in Antigone alongside future successor Jodie Whittaker as the title character.

Despite his tough-guy image, Eccleston is known to be quite humble and easy-going, with a dry wit, and often cracking self-deprecating jokes. In 2019 he released his autobiography, detailing how he cared for his father (who suffered from Alzheimer's Disease), and his own struggles with anorexia and depression. Much like another actor who played the Doctor and struggled with mental illness, Eccleston has a huge soft spot for his young fans, and numerous anecdotes attest that he is always on his best behavior with them.

that he would be returning to his role as the Ninth Doctor in an audio series for Big Finish, after a fifteen year absence from playing the character. By his own admission, this was financially motivated due to lack of work in the pandemic, but he has since found other work, including the 2021 psychological thriller 'Close to Me', based on the novel of the same name.