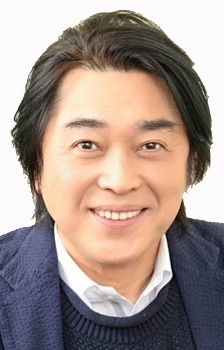 Masashi Ebara (born May 4, 1953), real name Masashi Ehara, is a Japanese seiyū, actor and narrator from Kanagawa Prefecture. He stands at 175 centimeters (5 feet, 9 inches) and is affiliated with 81 Produce.

He is best known for his roles in the Initial D series (as Jōshima Toshiya), Naruto (as Might Guy), Eat-Man (as Bolt Crank), the Shakugan no Shana series (as Alastor the Flame of Heavens), Bakusou Kyoudai! Let's & Go!! (as Doctor Tsuchiya), Buso Renkin (as Captain Bravo), The Transformers (as Ratchet) and Final Fantasy XIII (as Sazh Katzroy). He is also the official dub-over artist of Tom Hanks. In the latter case, he is sometimes darrined by Kōichi Yamadera when he is not available.

After the passing of Unshō Ishizuka, he finds himself to be the go-to replacement for Ishizuka's former roles.