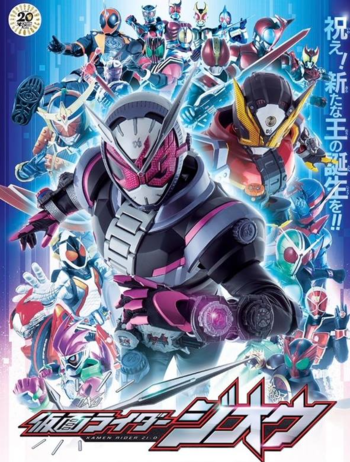 Go beyond space-time!
The legacy of the Heisei Kamen Riders has carried on throughout the era.
And now, they pass their power on to the new generation!
Rejoice! For the birth of a new king!
Advertisement:

Kamen Rider Zi-O (仮面ライダージオウ) is the 2018-2019 entry in the Kamen Rider series, the twentieth and final entry in the franchise's Heisei era, and the twenty-ninth entry overall. It aired alongside Kaitou Sentai Lupinranger VS Keisatsu Sentai Patranger in the Super Hero Time block, followed by Four Week Continuous Super Sentai Strongest Battle, and later, Kishiryu Sentai Ryusoulger. It ended on August 25, 2019, and was succeeded by Kamen Rider Zero-One, the first series of the Reiwa era.

In the year 2068, fifty years into the future, the world is ruled by an Evil Overlord named Ōma Zi-O: a Kamen Rider who seized the powers of every Heisei Kamen Rider who came before him to become the "Overlord of Time" on the Day of Ōma. The only option left for the dwindling La Résistance is to send two of their members back in time to Set Right What Once Went Wrong by assassinating Ōma Zi-O before he can achieve his full power.

Arriving into the year 2018, they locate the younger version of Ōma Zi-O as described in their history books: an ordinary and naive eighteen-year old named Sougo Tokiwa who childishly dreams of becoming "a king" that can bring happiness to the world. One of the Resistance members (Geiz Myokoin, aka Kamen Rider Geiz) is insistent on completing the assassination, but the other (Tsukuyomi) begins to question if the pure-hearted Sougo is really capable of growing up into the tyrannical Ōma Zi-O.

As Sougo claims the power of Kamen Rider Zi-O and embarks on the road to ascension, the history of the Kamen Riders begins to distort as various parties aim to twist the future to their advantage. A mysterious group of time-travelers named the Time Jackers begin to steal the power of the Kamen Riders, creating their own Another Riders as candidates to usurp Ōma Zi-O as the Overlord of Time. A sycophantic "prophet" of Ōma Zi-O named Woz arrives from the future to ensure the ascension of his master as history dictates. And standing beside Sougo are Tsukuyomi and Geiz, carefully watching his actions with a hand on their weapons. Will Sougo create an unexpected destiny as "the most beloved and kind Overlord in history", or is he fated to become the ultimate evil?

Not to be confused with its predecessor Kamen Rider ZO (which is actually pronounced "Zet-Oh" (as per the Japanese pronunciation of the letter Z), while this one is "zi-oh") or its distant relative Power Rangers Zeo.

Voted #15 series in the Heisei era, and #22 product overall in NHK’s All Kamen Rider Popularity Ranking.

"And thus marks the last page of the history of the Heisei Riders."
Feedback