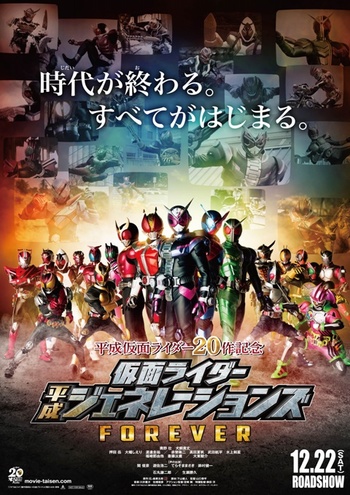 "A generation ends. A new era begins."
“For all who love the Kamen Riders...”
— Second Tagline
Advertisement:

Kamen Riders are hope bringers, as they protect people from the evil forces from time to time. But...they are only fictional heroes of a television series.

Are the Kamen Riders nothing but fictional characters?

A powerful Time Jacker named Tid appears, declaring that the story of Heisei Kamen Riders, starting from Kuuga, will end now. In order to accomplish this, Tid creates Another Den-O and Another Double, ordering them to pursue a young boy named Shingo. While Sougo Tokiwa attempts to protect the boy, he meets a Kamen Rider fan named Ataru, who demoralizes the existence of the Kamen Riders. On the other side, Sento Kiryu attempts to take on Tid alone, but he’s defeated and seemingly brainwashed to fight for Tid’s cause. As the mystery uncovered, the heroes head to the Kurogatake Mountains, wherein lies the tomb of Riku: the very first Kuuga and the protector of Linto tribe, as well as as the key place for the existence of Heisei Kamen Riders.

On June 23, 2020, Shout! Factory announced they would be translating and releasing the movie in North America, making it the first Kamen Rider movie to get an official North American release.

This movie has examples of the following tropes