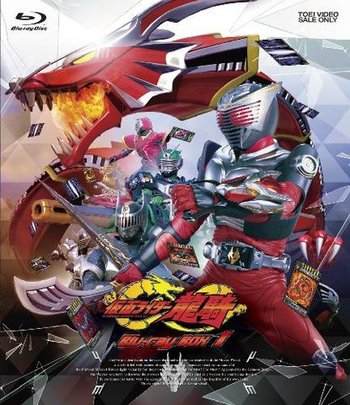 "Those who do not fight will not survive!"

Kamen Rider Ryuki is the 2002-2003 entry in the Kamen Rider franchise, and third in the Heisei Era.

Shinji Kido is a young, highly excitable Intrepid Reporter for the online news website ORE Journal. Whilst investigating a series of seemingly random disappearances, he stumbles across a mysterious card deck at the home of one of the victims. After picking it up, he finds that he is able to see hostile monsters living inside of reflective surfaces, and is soon sucked through into the Mirror World: a parallel universe that serves as their home.

He soon meets up with two people involved with this strange otherworld: Yui Kanzaki, a young girl looking for her missing brother, and her partner Ren Akiyama, a longcoat-wearing, Harley-riding stoic badass who has a card deck of his own and can use it to transform into Kamen Rider Knight. Despite the warnings of Ren and Yui, Shinji decides to make a contract with one of the Mirror Monsters to gain its power and fight as Kamen Rider Ryuki to protect the innocent. However, he has unwittingly entered into something far greater: the Rider War.

Thirteen Advent Card decks have been created for thirteen Kamen Riders, and There Can Be Only One. The mastermind behind the Rider War is Shiro Kanzaki, Yui's missing brother, and he offers to grant a single wish to the last Rider standing. Shinji is determined to stop the in-fighting between the Riders and concentrate on eliminating the threat of the Mirror Monsters, but Ren is equally determined to have his wish granted, and he isn't the only one. Ideals and friendships clash on and off the battlefield as the pressure of the war grows and the Riders are eliminated one by one.

Partnered with the Super Sentai show Ninpuu Sentai Hurricaneger after initially airing alongside the final episodes of Hyakujuu Sentai Gaoranger in what would later be known as the Super Hero Time block.

The series was adapted for Western audiences in 2009 as Kamen Rider Dragon Knight. As part of the franchise's 50th anniversary, Shout! Factory announced both Ryuki and Kamen Rider Zero-One would come to the United States through their TokuSHOUTsu channel and online website.

Voted #6 series in the Heisei era and #6 product overall in NHK’s All Kamen Rider Popularity Vote.