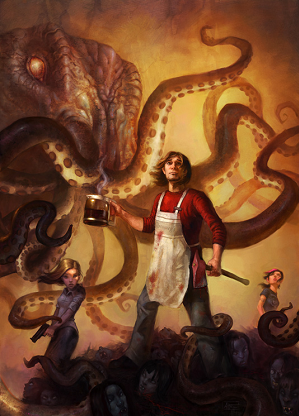 Just your average "slacker meets eldritch aliens" story.
"A devil from the Outer Dark," he grunted. "Oh, they're nothing uncommon. They lurk as thick as fleas outside the belt of light which surrounds this world. I've heard the wise men of Zamora talk of them. Some find their way to Earth, but when they do they have to take on some earthly form and flesh of some sort. A man like myself, with a sword, is a match for any amount of fangs and talons, infernal or terrestrial..."
— Conan the Barbarian, The Vale of Lost Women
Advertisement:

Oh no! The Cult of K'rzy has read from the Book of Darned Awful Things and unleashed the dreaded might of Yog-Sofserve, the Black Goat of the Cream with a Thousand Flavors! Yep, it's end of the world time. But wait! Those big darned heroes showed up and shoved old Yog back into his book. Crisis averted! And nobody went gibbering insane!

Where the traditionally Lovecraftian Cosmic Horror Story tries to unleash an emotional whammy of despair and hopelessness on the characters and the audience, Lovecraft Lite — also referred to as "Post-Lovecraftian" in analyses like "What is Post-Lovecraftian fiction?"

— has a more modest aim. It uses the toys and themes of Trope Codifier H. P. Lovecraft to tell a different, more optimistic kind of story in the genre of Speculative Fiction. In a traditional Cosmic Horror Story, hope is gone. Lovecraft Lite, though, doesn't have the same hopelessness and ends up being more of an adventure story that just so happens to take place in a similar setting. It's basically a Cosmic Horror Story on anti-depressants. May sometimes cause cases of Vile Villain, Saccharine Show if said abomination clashes too much with the tone of the work.

Since part of the definition of the Cosmic Horror Story is that mankind has no chance at even comprehending the hideous Truth of the universe, let alone fighting it; any series where someone can defeat Eldritch Abominations is usually closer to Lovecraft Lite than Cosmic Horror Story; it can still be a CHS if it can be defeated, but at great cost, especially if it only delays the inevitable, opens the door for even nastier things, or allows its essence to infect and contaminate the world in its absence. note Although there are exceptions; after all, one of Lovecraft's lesser themes was that, but for a few exceptions, none of the horrors seen in his stories were any more important than humanity (zero is not greater than zero, after all), and thus just as subject to having their plans go awry as humans.

Sometime this is done by having bigger fish on the hero's side, possibly as a Big Good. Other times the monsters might be powerful and dangerous, but still vulnerable to humanity's weapons and abilities. Everything from Powered Armor to Eye Beams to Functional Magic to even just a plain sword or a gun can help even the odds.

Two tropes that commonly overlap in Lovecraft Lite stories are Did We Just Have Tea with Cthulhu? and Adorable Abomination, which respectively refer to benevolent and cute Lovecraftian monsters.

It may perhaps be objected that "Lovecraft Lite" is a bit of a misnomer, since the man himself actually wrote more than a few stories where the monsters can in fact be thwarted, sometimes even with mundane methods. But then again, Lovecraft is such a formative influence on Cosmic Horror that his name has become metonymous for the whole genre. See the Cthulhu Mythos for more.

Remember, tropes are tools. Don't get decived by the term "Lite" if you see this trope listed in a horror work. After all, this trope is mostly related to the "cosmic" aspects of the work. With the horror tropes played right, a Lovecraft Lite work can be truly terrifying.