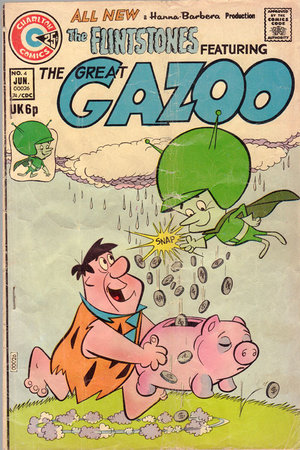 Making it rain in a whole new way.
"The Trickster figure is deeply rooted in the folklore and mythology of every culture; a cosmic jester, a wise fool, a mysterious, mischievous creature, fun-loving and rebellious, and unconstrained by the laws which bound normal men."
— Stuart Millard on The Legend of Bill Murray, Smoke and Mirrors & Steven Seagal
Advertisement:

A good-natured weirdo with (effectively) magical powers, often in the form of a Sufficiently Advanced Alien. This subtrope of The Trickster is from some alternate reality or alternate time, with Reality Warper powers. The purpose of these characters is to enable unusual plots, not resolve them.

A Great Gazoo is similar to a Trickster God, and possesses similar powers, but does not come from a pantheon. Their pranks/trolling are either due to a need to satisfy their own boredom (and torturing helpless savages will solve that) or they have an earnest desire to help their less-powerful friends, but their alien background causes them to provide completely inappropriate solutions to the problem. Getting the second one to stop helping is usually as difficult as getting the first one to stop Trolling. The problems they cause have to be solved by the protagonists' wits because they don't have enough power to just Counterspell or Dispel Magic.

This trope takes its name from the character in The Flintstones, a little green alien that only Fred, Barney, and small children can see. Neither is related to The Grand Wazoo.

Balan is a fast-talking, overtly magical entity that can duplicate himself, create portals to and from the Real World and Wonderland, shapeshift, conjure a wide-variety of objects, move at great speeds, fly and do virtually anything.

Balan is a fast-talking, overtly magical entity that can duplicate himself, create portals to and from the Real World and Wonderland, shapeshift, conjure a wide-variety of objects, move at great speeds, fly and do virtually anything.