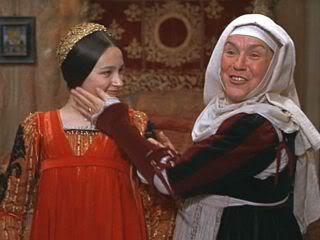 In many classic tales, there exists the iconic imagery of a beautiful young Maiden accompanied by an older Maid.

It's an old archetype because in those days a woman going anywhere on her own was going to either a) have sex or b) be raped. The presence of a chaperone was intended to discourage the former and prevent the latter.

In this context, "Maid" doesn't mean "servant". It refers to more archaic connotations where it just implied an older woman. Hence the terms Old Maid and Fair Maiden. Still, The Maid may well be in the service of The Maiden, possibly as a Lady-in-Waiting.

The Maiden is more central to the story than The Maid. She may be The Ingenue, a Princess Classic, or a stubborn Plucky Girl. Basically a Female Hero appropriate for the time and place and audience. As such, expect her to be in a romantic plot.

The Maid will be the Maiden's confidante, sometimes a caretaker, older relative or just a good friend. If it is indeed a romance, The Maid will be the matchmaker, occasionally playing Secret-Keeper if its a forbidden love. Alternatively The Maid will be a Matron Chaperone warning about the perils of rushing a relationship or blocking the male love interest.

If the Maiden's mother is also prominent, she'll usually be younger than the Maid and complete a Hecate Sisters ensemble with the other two.

Either because she's old, less attractive, or her own romances (if any) are less important, she's less desirable to the target audience. Has a tendency to be fatter than The Maiden also. But that doesn't mean she can't be a fan favorite, or to lack in gumption and spunk — she's sort of a prototypical Sassy Secretary.

Most common in romantic plays and musicals (and practically a requirement of any medieval romantic comedy) but the dynamic turns up in other mediums and genres too so they don't always have to be involved in a love story. If the characters sing, The Maid's voice type is either Mezzo or Alto, while The Maiden is a Soprano (usually an Innocent Soprano). See also Matron Chaperone.