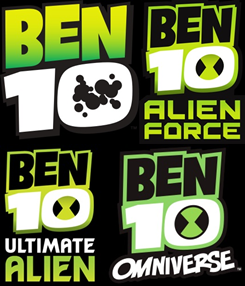 Because calling it "Ben 50" would just be dumb!
"It started when an alien device did what it did. It stuck itself upon his wrist with secrets that it hid. Now, he's got superpowers; he's no ordinary kid. He's Ben 10!"
— Original series theme tune
Advertisement:

Ben 10 is a series of cartoons made by a group called Man of Action (Duncan Rouleau, Joe Casey, Joe Kelly, and Steven T. Seagle) that has aired on Cartoon Network since 2005. It was the group's first collaboration.

The series follows a boy named Ben Tennyson who, on the first night of a summer road-trip with his grandfather Max and his cousin Gwen, stumbles across an alien device known as the Omnitrix which bonds itself to his wrist like a watch. Ben finds that the device has alien DNA encoded in it which allows him to transform to a variety of alien species, with their own set of skills. From then on, Ben uses the device to take on any threats that come his way, while causing a few bouts of mischief in the process. As he grows as a hero, Ben learns that he didn't gain the Omnitrix by coincidence and finds that his family has been involved with aliens long before he has.

Tropes across the franchise:

Vilgax detonating the Chronosapien Time Bomb to destroy most universes and discarding Eon when he is no longer useful.

Vilgax detonating the Chronosapien Time Bomb to destroy most universes and discarding Eon when he is no longer useful.