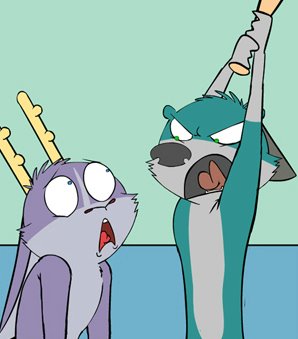 The Bedfellows is a furry-oriented webcomic (exclusively on FurAffinity) by Kris Patrick of Cat Ghost fame, later adapted to a YouTube series of comedy animated short films. It follows the crazy antics of two anthropomorphic roommates: Robert "Sheen" Hunter, a mean-spirited and ruthless green cat/dog cross; and Taylor "Fatigue" Stenson, a very dumb and happy-go-lucky purple Jackalope of unknown gender. Together, they do a lot of crazy stuff and get on each other's nerves.

It was announced in February 2013 that the webtoon series was picked up by Mondo Media (of Happy Tree Friends and Dick Figures fame) for distribution.

The comics are available to read at FurAffinity

. Be warned: They contain Not Safe for Work elements.

In February 2017, a video game adaptation called Bedfellows: Frenzy was released on Steam. The plot is basically Sheen and/or Fatigue playing the in-universe Rampage homage, Frenzy, while dealing with the eccentricities of the rest of the Bedfellows cast.