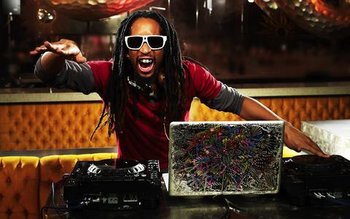 You can practically hear pictures of Lil' Jon.
YEEEEEEEEEEEEEEAAAAAAAHHHHHHHHHH-UUUUUUUHHHHH!!!!!!!!
—Lil' Jon, regarding everything
Advertisement:

The Trope Codifier for "Crunk" Hip-Hop, Lil' Jon (real name Jonathan Smith, born January 17, 1971) is the Large Ham of the hip-hop world. He got his start with The East Side Boyz, largely defining what Crunk was and what it could be, before making his big "break" with Kings of Crunk. From then on, he largely gained his memetic style as a guest feature and hype man on other artist's tracks, gaining almost legendary status with how much manic energy he can bring to a track. As the 2000's rolled on, he began to make a transition away from Crunk towards Trap Music, though with his prolific nature, he's bounced around throughout.

He has had several hits, most notably "Get Low", "Turn Down for What" and his memorable appearance on Usher's "Yeah!".

Tropes that apply to Lil Jon: