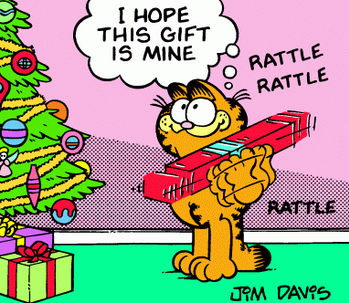 A character obtains a wrapped present and shakes it in order to identify the contents. Sometimes said shaking breaks the gift inside, which was fragile. This might be spun as black humor if the gift was something alive, although sometimes this will be subverted by having the gift-giver stop the would-be shaker before the creature inside is harmed.

Compare to Present Peeking which also involves unwrapping the presents.