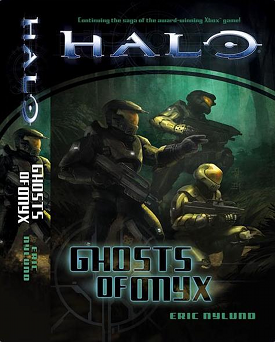 Halo: Ghosts of Onyx is the fourth Halo novel, and the third (and final) one written by Eric Nylund, published in 2006. The book primarily tells the story of the SPARTAN-III Super Soldiers (the successors to the SPARTAN-II program) and their training on the classified planet Onyx, but it is also an informal sequel to Halo: First Strike, with much of the novel taking place concurrently with the second half of Halo 2 (in particular, it expands upon the opening salvos of the Covenant's Great Schism).