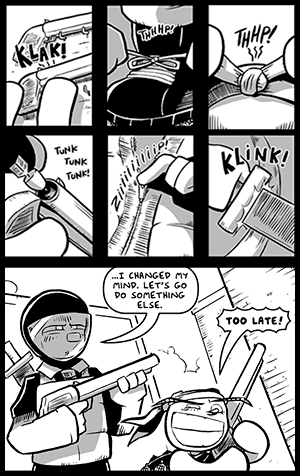 "Barry got back to his feet inside the Bright Falls General Store and dusted himself off. Right next to the cans of baked beans was a locked case filled with flare guns. And yet, here was a conveniently placed barrel of crowbars! Barry's smile widened as he realized that this was the classic movie scene where the hero had to gear up and arm himself to the teeth. He threw himself into the role."
— Alan Wake
Advertisement:

Similar to the Training Montage, it consists of the hero (and his optional team) gearing up for the big fight, preparing a multitude of weapons in anticipation of the need for More Dakka, usually taken from a Wall of Weapons. Usually features close-up shots of guns being loaded, knives being sheathed, headbands being tied, etc. Never complete without a veritable symphony of metallic clicking noises.

Whether or not all the weapons are used or whether the hero is held to the limits of what is shown is up for grabs.

Frequently there will be one "special" weapon, a small and somewhat unusual one normally, which will play a critical role in the upcoming battle.

As the use of firearms is a modern contrivance, works such as The Iliad and Beowulf often depicted warriors donning their arms and armor in scenes heavy with ceremony and ritual.

open/close all folders
Advertising
Anime & Manga
Comic Books
Fan Works
Films — Animation
Films — Live-Action
Literature
Live-Action TV
Music
Mythology & Religion
Theater
Speaker A: ... gobbling the whole, sharpening the flashing iron.
Speaker B: And the helmets are shaking their purple-dyed crests, and for the wearers of breast-plates the weavers are striking up the wise shuttle's songs, that wakes up those who are asleep.
Speaker A: And he is gluing together the chariot's rail.
Video Games
Web Comics
Web Original
Web Videos
Western Animation
Feedback

The ARCAM Private Army's Mount Ararat detachment was being mobilized after alarms blared, indicating that there was an attack on the research center.

Yu joined up in the fight, loading up his sidearm and sheathed the Orihalcon-based combat knife made for him by Professor Mayzel.

The ARCAM Private Army's Mount Ararat detachment was being mobilized after alarms blared, indicating that there was an attack on the research center.

Yu joined up in the fight, loading up his sidearm and sheathed the Orihalcon-based combat knife made for him by Professor Mayzel.