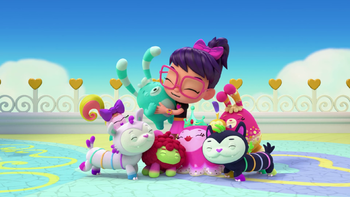 Gotta hug 'em all.
"Catching Fuzzlies
To give them hugs
They're soft and cuddly
Like my best pal Bozzly!
Don't worry Fuzzlies, you're safe when we're together
You know we're gonna be friends forever!"
— Expository Theme Tune, Season 1
Advertisement:

Abby Hatcher is a Nick Jr. animated series created by Canadian studios Guru Studio and Spin Master Entertainment, who previously created PAW Patrol, Little Charmers, and Rusty Rivets for the channel. In its home country, it airs on TVOKids.

The series involves a 7-year-old Asian-American girl named Abby who lives in her parents' hotel. She often helps out a species of creatures called the Fuzzlies, who are Ridiculously Cute Critters with unique abilities. Her sidekick is a rabbit-like Fuzzly named Bozzly. Together, they save the day when trouble ensues.

On December 17, 2018, the episodes "Abby's Squeaky Peeper Panic" and "Things That Go Ding in the Night" were released early on the Nick Jr website and app. The series was originally scheduled to premiere on television on January 1, 2019, but it ended up airing on December 31st, 2018. The series moved to the Nick Jr. channel in September 2019.

In June 2019, a second season was commissioned. The show also has its own YouTube channel.

The show was not renewed for a third season, and the show was quietly canceled, with one episode being left unaired until April 2. 2022. Most of the cast is now starring on other shows: Leo Origil and Jacob Soley, who did the voices of Bo and Teeny Terry, are currently starring on another Nick Jr. show, Blue's Clues & You!, while Origil is now providing a main role on Mighty Express. Wyatt White, who voices Bozzly, is now starring on the PBS Kids show Elinor Wonders Why, while Princess Flug's actor Michela Luci is starring on the Netflix shows True and the Rainbow Kingdom and Go Dog Go.

Not related to Billy Hatcher, or Teri Hatcher.

Abby gets her own original birthday song.

Example of:
Happy Birthday to You!

Abby gets her own original birthday song.