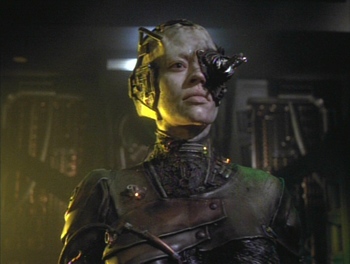 The debut of Seven Of Nine.
A new enemy, capable of blasting the Borg to bits, is threatening to destroy the Collective and then overwhelm the Delta Quadrant. Janeway must form a dangerous alliance with the Borg, represented by the drone Seven of Nine, in order to have any hope of surviving this new threat.