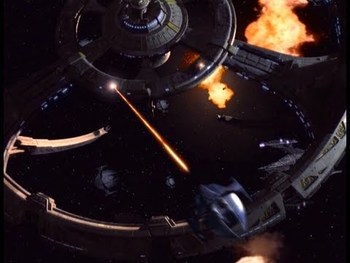 The Dominion War begins
"One thing's for certain: we're losing the peace. Which means a war could be our only hope."
Advertisement:

It's been five weeks since Cardassia has joined the Dominion, and for those five weeks, the Dominion has been sending convoys of ships to Cardassian space. The senior staff are viewing the convoy as it passes Deep Space Nine but are aware that war horns are on the horizon and that the Cardassians may want to retake the station. This is reinforced when Dax, Odo, and Kira discover that Quark has smuggled in several crates of Yamok sauce in anticipation of the takeover. Dax orders Odo to dispose of the sauce. Things get worse when Sisko finds out that the Romulans have signed a non-aggression pact with the Dominion. With this recent news, Starfleet has declared that the Dominion convoys must stop, and orders a minefield deployed. The Senior staff are well aware of the consequences of this: that the Dominion in the Alpha Quadrant will see this as a declaration of war, but at this point, Starfleet has no choice.

Rom is able to come up with a design that allows for self replicating mines that are cloaked. But there is a drawback to this approach: the minefield must fully be in place before it can be activated. The Dominion become almost instantly aware of the minefield being deployed. Their ambassador, Weyoun, arrives at Deep Space Nine to issue an ultimatum to stop the deployment of the minefield. After a few rounds of doublespeak about assistance to the poor Cardassian people, both parties know that negotiations are meaningless and that the Dominion will attack Deep Space Nine.

However, Starfleet informs Sisko that no additional forces will be deployed to assist Deep Space Nine with the deployment of the minefield. Sisko asks Martok to take his Bird of Prey to monitor for activity at the Cardassian Border, and report back when the Cardassians and the Dominion start moving. Sisko also asks Kira to call for a meeting of Bajor's leaders, to use his influence as Emissary to have Bajor sign the offer of non-aggression from the Dominion. As Sisko puts it, this is why Sisko stopped Bajor from joining the Federation: if Deep Space Nine were to fall to the Cardassians, Bajor would be an easy target, and why they need to be kept out of the fighting.

Sisko marries Rom and Leeta and Leeta leaves the station with all Bajorans (with the exception of Kira). Sisko also prepares a special computer program to be used if the Federation is to abandon the station. Martok then contacts the station and informs them a large Dominion fleet is on the way. As the station prepares for battle, Garak tells Odo that when the Klingons attacked Deep Space Nine, he and Dukat fought side-by-side against the Klingons and how, for a moment, he considered shooting Dukat In the Back. He only let Dukat live because otherwise he would likely have been dead himself, and that the entire Alpha Quadrant will soon regret his decision.

The Dominion attacks the station and suffers serious casualties. Weyoun is shocked that Deep Space Nine appears to be holding up very well, not realizing that the Federation has been working on countering Dominion weapons ever since the destruction of the U.S.S. Odyssey. Undeterred, Dukat continues to press the attack and soon the shields of Deep Space Nine fall. But this victory comes at a cost: with the Rotarran providing cover fire for the Defiant, Dax is able to successfully deploy the minefield. With this critical objective completed, Sisko declares that there is nothing more to do and orders all Starfleet personnel to evacuate the station.

Sisko makes a speech to the station population and tells them that despite this loss, Sisko is committed to returning to Deep Space Nine. Not only that, while the Dominion and Cardassians were busy retaking the station, a joint Federation and Klingon attack force were able to destroy a critical Dominion shipyard. Sisko then beams off the station to the Defiant, where Garak joins the crew, noting that he is a dead man if he remained on Deep Space Nine. As soon as Sisko is on board, Kira orders the execution of the program Sisko prepared. This program overloads almost all computer systems on Deep Space Nine, leaving the station less then functional, and forcing the Dominion to repair the station if they want to keep it.

At this point, both the Defiant and the Rotarran hightail it from Deep Space Nine, thus completing the conquest of the station by the Dominion. Weyoun finds this victory hollow: the minefield is up, many ships were destroyed in the retaking of this station, and the destruction of the shipyard leaves a poor taste in the Vorta's mouth. Damar and Dukat seem to ignore that development as they almost want to proceed with attacking Bajor until Weyoun says that such an attack is off limits. On the station, the welcoming party consists of Kira, Quark, and Odo. Weyoun is honoured to treat Odo as one of the founders. Meanwhile, Quark finds that Rom did not leave with the Defiant as he is now acting as a spy for the Federation, under the guise of working for his brother. They also discover that Jake also did not leave with the Defiant but remained on the station to report on the war, trusting that his status as the son of the Emissary will protect him — an action that infuriates Sisko but leaves him no choice but to leave his son behind.

Dukat escorts Weyoun to Ops where they note the damage done by Sisko's program. Dukat knows this was deliberate, after all, the Cardassians did the same thing when they abandoned the now-rechristened Terok Nor. They walk into Dukat's new office where something catches Weyoun's eye: Sisko's baseball.

Weyoun: What is that?
Dukat: A message from Sisko.
Weyoun: I don't understand.
Dukat: He's letting me know he'll be back.

The Defiant and Rotarran meet up with a large Federation and Klingon Fleet, ready to take the fight to the Dominion.

The Dominion War has begun.