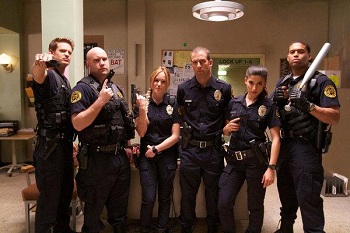 Yeah, the guy on the left is holding his gun Gangsta Style. Don't hold that against him
"Let's get out there and kill something!"
— Captain Frank Dashell
Advertisement:

Death Valley was a Live Action half-hour Black Comedy/Horror show on MTV. It revolved around the UTF (Undead Task Force), a branch of the Los Angeles Police Department that deal with Vampires, Werewolves and Zombies in the San Fernando Valley. A year before the series began, these supernatural monsters suddenly appeared in the Valley for no known reason, forcing its inhabitants to adapt to their suddenly shifted lives.

The series was filmed as a faux-documentary in the style of COPS, with the members of the UTF followed by a camera crew that are capturing their efforts to deal with various supernatural outbreaks. There are six featured members of the UTF:

There is also a recurring team of camera men and sound engineers that form a minor supporting cast, frequently in the background and the edge of the screen when the officers are in the field. Unlike most mockumentaries, the crew of the Show Within a Show are often dragged into the action, sometimes assisting the officers in their adventures and even getting killed in the line of duty.

The show premiered in August 2011, but was not renewed for a second season, leaving it at twelve episodes.

Do not confuse this show with the old kung fu film with the same name.