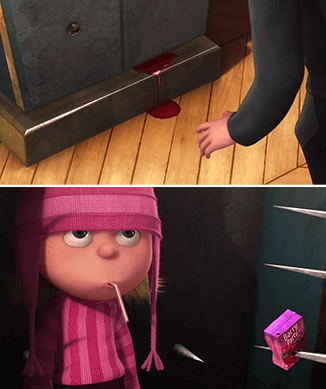 That juice box sure won't mess with you anytime soon.
"It's blood!" said the carpenter.
"It's blood, isn't it?" said a musician.
"Blood!!" screamed Christine. "Blood!!"
It was Agnes's terrible fate to keep her head in a crisis. She sniffed her finger again.
"It's turpentine," said Agnes. "Er. Sorry. Is that wrong?"
— Maskerade
Advertisement:

This is when a spillage of some innocent red substance is mistaken for blood. This substance is, more often than not, ketchup, and Hilarity Ensues most of the time. This is, however, occasionally used seriously when someone is trying to fake an injury.

Someone may or may not dip their finger in it and taste it, much to everyone else's horror, and pronounce it as being 'tasty.'

It's also worth noting that ketchup looks absolutely nothing like blood, apart from its colour. Smelling like spaghetti sauce rather than an abattoir is also a bit of a clue. The gag specifically involving ketchup is more common in older works, when tomato ketchup was much thinner and runnier than it usually is today.

A subtrope of Not What It Looks Like. Compare with Symbolic Blood and Grossout Fakeout. Prop blood is Kensington Gore. When it really is blood, but not belonging to the splattered person, it's Not His Blood. If someone deliberately invokes it using sauce, it's overlapping with Unconventional Food Usage. Not to be confused with the Chunky Salsa Rule, nor with a Fallout trait/perk. See Did Not Do the Bloody Research for confusion about the rude word "bloody." See also Prank Injuries.

If it is actual blood, that's Bloody Horror.

And thus, the universe is balanced.

And thus, the universe is balanced.