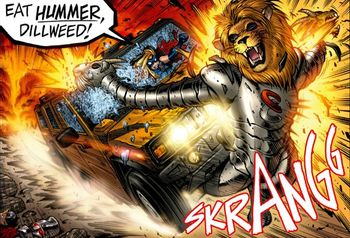 We probably could make this picture more awesome, but we're really not sure how.
"Captain Hammer threw a car at my head."
— Dr. Horrible, Dr. Horrible's Sing-Along Blog
Advertisement:

Sometimes, the best weapon you could possibly use isn't the one you hold, it's the one you drive. Which kind of makes sense, considering that getting hit by at least a metric tonne of metal moving at several tens of kilometers per hour is bound to be painful. Especially if it's someone that Drives Like Crazy.

Automobiles are, in fact, one of the most efficient killing machines on the surface of the planet.note Unless there's a war going on in your country, cars kill more people there annually than any other non-disease source, but they're still way behind firearms if you count deaths in war. Being killed by a car is a very common cause of Death by Origin Story. How he/she was killed? Car accident. How convenient.

Car Fu is when someone, generally the hero but not exclusively so, uses the car (or van, or bus, etc.) they're driving as a large, improvised, moving weapon. More often than not, it's in an attempt to mow down the bad guys, but sometimes it's a bid to make them scatter in an attempt to avoid getting run over.

In a rarer form, Car Fu can also include a car being thrown as a weapon. Or used as a giant club. This version is most often used by superheroes and supervillains, who generally have the Super Strength to pull this off. While rarer than the conventional form, within superhero stories it's quite common...despite the fact that anybody who's actually strong enough to throw a car faster than it can drive is probably strong enough to not need the car at all.

May be part of a Vehicular Combat, and a particularly effective maneuver against zombies. If done with ships, airplanes, or spaceships, it's Ramming Always Works. If the car is rigged to explode on impact, it's a Molotov Truck; if it just happens to do so, it's Every Car Is a Pinto. For murder attempts with heavy machinery, see Construction Vehicle Rampage and its Sub-Trope Forklift Fu. Compare Weaponized Car when your car can attack with attached weapons instead of just ramming.

Nina Williams on a bike gets into an encounter with a big rig. She decides to stay and play chicken with it.

Nina Williams on a bike gets into an encounter with a big rig. She decides to stay and play chicken with it.