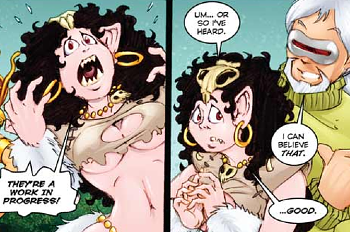 "Vince McMahon did stage his own death a couple of years ago, his limo blew up. How do I know that? I read it in a... in a book somewhere. I wouldn't have known it otherwise." [clears throat]
— Chris Cotter, FOX Business
Advertisement:

A trope wherein a character delivers some advice or information relating to a field which it would be incredibly embarrassing or contrary to their public image to know. For instance, Mannfred M. Manly informs you on the plot of the latest My Little Pony episode, or Miss Chastity McInnocence blurts out directions for Amsterdam's red light district. Whatever the subject and whomever the person, they then try to cover up their association with it by appending "Or So I Heard", "or so I've been told", "I read it in an article", etc.

Please do not pothole links to here where they don't belong.

Related to Suspiciously Specific Denial, It's for a Book, Shameful Source of Knowledge, and I Have This Friend. Similar to Knows a Guy Who Knows a Guy in cases where the character wants to downplay his association with the "guy" in question. Compare …But He Sounds Handsome and Verbal Backspace.

Alternative Title(s): Or So Ive Heard