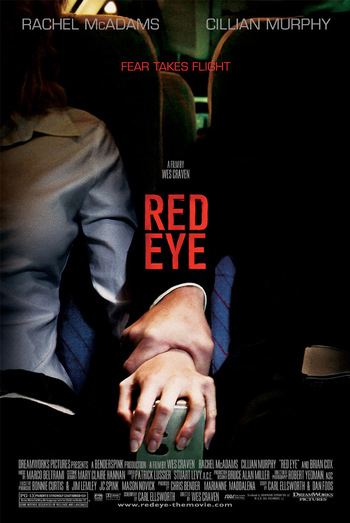 Two attractive people get onto a plane together. Things go downhill from there.
"Lisa, whatever female-driven, emotion-based dilemma you may be dealing with right now, you have my sympathy. But for the sake of time and sanity, let's break this down into a little male-driven fact-based logic. One simple phone call saves your dad's life."
— Jackson Rippner
Advertisement:

Mild-mannered hotel manager Lisa Reisert (McAdams), on her way home from her grandmother's funeral, is seated for an overnight flight next to charming, affable Jackson Rippner (Murphy). Over the course of the flight, Rippner reveals himself to be a Psycho for Hire acutely interested in Lisa's career... especially with the Secretary of Homeland Security (and his family) staying at her hotel. Trapped in close proximity to Rippner and informed that one of his associates is holding her father (Brian Cox) hostage, Lisa attempts to keep her father safe and stop Rippner's assassination plot.

Not to be confused with the Korean horror movie of the same name, released in the same year, or the conservative News Parody/Faux News show Red Eye with Greg Gutfeld.