Film / My Soul to Take 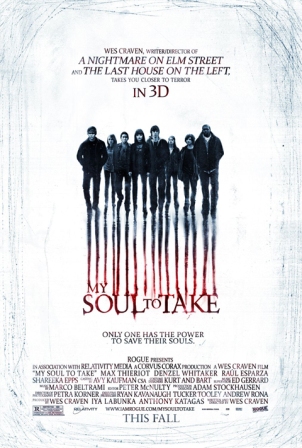 My Soul to Take is a 2010 horror movie from Wes Craven, being his first since Wes Craven's New Nightmare that he wrote, produced and directed.

As legend has it, a serial killer, the Ripper, will return to the quaint town of Riverton to murder the seven children that were born the night he allegedly died.

Sixteen years after his death, members of the community begin to disappear. All the teens know the Ripper to be dead, but they hold the belief that his soul may have reincarnated into one of their bodies, forcing them to discover who among them may be the killer. Only one of the teenagers knows the answer.

Adam "Bug" Heller was supposed to die on the bloody night his father went insane. Unaware of his father's terrifying crimes, Bug has been plagued by nightmares since he was a baby. But if Bug hopes to save his friends from the Ripper, he must face an evil that won't rest... until the Ripper finishes the job it began the day Bug was born.

My Soul to Take provides examples of: